RT-qPCR (Reverse Transcription Quantitative PCR) is a valuable tool for assessing gene expression by measuring the abundance of certain RNAs. Two general methods are available: one-step RT-qPCR and two-step RT-qPCR. In both cases, RNA is first reverse-transcribed into cDNA, which is then used as the template for qPCR amplification. In one-step RT-qPCR, cDNA synthesis and qPCR are performed in a single reaction vessel in a common reaction buffer. In two-step RT-qPCR, cDNA is synthesized in one reaction, and an aliquot of the cDNA is then used for a subsequent qPCR experiment. 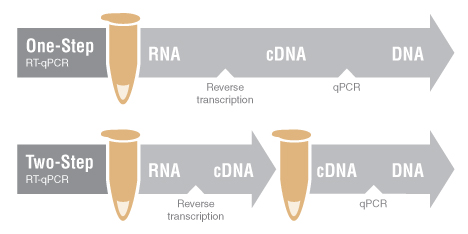 The quality and scarcity of RNA samples are important considerations for one-step RT-qPCR. Where RNA is of low quality, and inhibitors are inconsistently present between samples, reaction efficiency can be impacted to varying degrees, reducing comparability between samples. In addition, because the cDNA synthesis product cannot be saved after one-step RT-qPCR, additional aliquots of the original RNA sample(s) are required in order to repeat reactions or to assess the expression of other genes.


In two-step RT-qPCR, cDNA synthesis is carried out using random hexamers, oligo-dT primers, and/or gene-specific primers. Reactions using random hexamers and/or oligo-dT primers produce cDNA that is a mixture of various RNA species in the sample. The cDNA synthesis reaction can be scaled up to accommodate higher RNA input, and extraction and precipitation steps can be used to concentrate and/or further purify the cDNA. This allows better control over the amount of cDNA template that is used for qPCR quantitation. Because only a portion of the cDNA product is used in the subsequent qPCR step, remaining cDNA can be stored for future use, or quantitating the expression of multiple genes from a single RNA/cDNA sample.

The drawback of two-step RT-qPCR is that it requires an extra open-tube step, more pipetting manipulations, and longer hands-on time. This can lead to greater variability and risk of contamination, and makes two-step RT-qPCR less amenable to high-throughput applications.